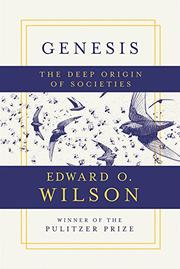 The Deep Origin of Societies

The acclaimed naturalist delivers a pithy summary of evidence for Darwinian evolution of human behavior.

The truth of human physical evolution, although denied by many laymen, hasn’t troubled scientists since the 19th century. Behavioral evolution acquired a bad reputation when social Darwinists taught that being rich or powerful showed superior fitness (Darwin disagreed). In the 1960s, Wilson (Emeritus, Evolutionary Biology/Harvard Univ.; The Origins of Creativity, 2017, etc.) became a world expert on ants, a social insect, but he broadened his sights to include social evolution in general. In 1975, he published Sociobiology (1975), which provoked a firestorm; however, once accusations of fascism died down, biologists decided that he was onto something significant. The subject is only mildly controversial today, and Wilson, a skilled writer who accessibly addresses lay audiences, explains that simple cooperation exists throughout biological systems as far back as bacteria, and plenty of advanced species show a modest degree of division of labor. Extremely few—perhaps 2 percent—have reached the highest level of “eusociality,” a rare condition that “has conferred ecological dominance on land by some of the species that possess it, particularly the ants, termites, and humans.” The author proceeds to deliver a magisterial history of social evolution, from clouds of midges or sparrows to the grotesqueries of ant colonies to the perhaps parallel features of human society in which childless elements (grandparents, maiden aunts, young siblings, priests, nuns, etc.) seem to participate in nurturing the next generation. Altruism turns out to be a powerful evolutionary tool when employed on a broad scale. A selfish individual prospers compared to his neighbors, but a group that cooperates always outcompetes one with selfish members.

A lucid, concise overview of human evolution that mentions tools and brain power in passing but focuses on the true source of our pre-eminence: the ability to work together.