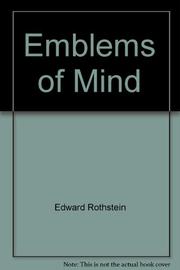 The Inner Life of Music and Mathematics

A thoughtful exploration of the ``deep structure'' similarities between the intellectual graces of music and mathematics. Now chief music critic for the New York Times, Rothstein was trained as a mathematician. He takes as his premise here a congruence between the two fields—music and mathematics—extending far beyond the notion that the conventional western system of tonality derives from certain physical laws that can be expressed in mathematical ratios. Pursuing his intuition that the underlying substance of both disciplines might cast a single unified shadow on the wall of Plato's cave, Rothstein enters into an extended discussion of specific mathematical and musical problems. His examples are sufficiently sophisticated to interest the intellectually adventurous—and to frighten away the casual reader, who will be baffled by the mathematical equations sprinkled throughout. The evident honesty of the author's personal search for the ways in which musical and mathematical descriptions present a common ``emblem of mind'' compensates for his less than scintillating prose style. If there is no real revelation here, there is plenty of lively insight, in particular Rothstein's admirable attempts to find specifics in both mathematics and music to support not only the Keatsian equivalence between beauty and truth, but also his belief that both the beautiful and the true lead to a hitherto unsuspected depth of emotional awareness. The Romantic poets' search for essence beneath the superficial details of experience forms something of a subtext, and the author appropriately compares his own process to Wordsworth's journey to the top of Mount Snowdon in quest of ``the interrelationships between objects in the natural world and the mind of the observer.'' Readers more interested in substance than glamour—and willing to follow their guide through some rocky terrain—will be rewarded.