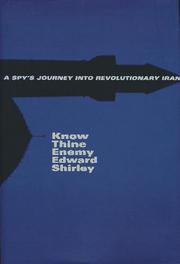  A rare, fascinating journey into post-revolutionary Iran, through the eyes of a former CIA field agent who risks his life to enter the country he has spent his career studying from afar. What most Americans know about Iran comes from news headlines and ungenerous stereotypes of Islamic fundamentalism. The true Persia is downtrodden, weary from its long war with Iraq, and curious about its enemies in the Western world, particularly America. In his first book, a unique, firsthand account of life behind ``enemy'' lines, Shirley tells how he bravely smuggled himself into Iran in a cramped, dark box in the back of a friend's car, and the midnight trek across military checkpoints makes a harrowing story. But that is as close to James Bond as the book gets. From there, the author travels the country with a trusted guide, cross-examining average Iranians and probing their bitterness toward the late Ayatollah Khomeini and the ruling clerics who led their country through the disastrous Iran-Iraq war. Shirley also offers a smart indictment of his ex-employer for what he calls ``rampant incompetence.'' Its affliction: too few agents who take an intellectual interest in their target countries, learning the native language, and reading indigenous newspapers. As if casting off the remnants of that world, throughout his adventures the author has to fight all his espionage instincts, such as the urge to look for possible turncoats: ``I wasn't, and never would be again a case officer who recruits foreigners into espionage. But I kept looking at the world as a spy, endlessly guessing whether a foreigner, stranger, acquaintance, or friend might for principle, profit, anger or love illicitly ally with an American.'' Ultimately, the book's richest payoff comes in the stark portrait it paints of Iran: a depressed nation, resentful of its current leadership while trying to reconcile that cynicism with Islamic principles and values.