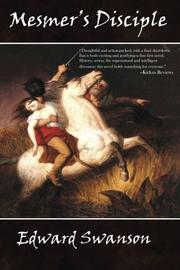 Deas, a historical figure famous for frontier paintings, mysteriously went insane after becoming involved in mesmerism while in St. Louis. He returned to New York and in 1848 was committed to the Bloomingdale asylum. Swanson skillfully weaves the artist’s tale into his debut novel. Police Capt. Alvord Rawn is dismissed from the New York City Police Department for his vengeful, ruthless massacre of an Irish gang. He takes a job as a private detective working for Deas’ mother, who fears her son is losing his mind. Mrs. Deas pays Rawn well to retrieve Deas from St. Louis—by force if necessary. Swanson gives the work a 19th century feel by salting it with historical detail and imbuing characters with the manners and attitudes of the era. He also makes use of 19th century prose style to mimic period writers: “Stout was the truncheon in his belt, hickory in origin and delightfully wieldy.” This approach works, but when Swanson uses modern idioms, it jars; e.g., “shit like this”; “Damn straight I did”; “smoked his competition.” Along the way, Rawn teams up with Finnbar Fagan, a would-be Irish writer, and Marcel Durand, a true frontiersman. Both are reliable allies and thinking men, allowing Swanson to explore various ideas concerning the nature of honor, justice, race relations and art in 19th century America. As the story progresses, Deas partners with Rawn and company to bring down Abendroth as it becomes increasingly obvious the count is evil, tapping into a demonic well for his powers. Thoughtful and action-packed, with a final showdown that is both exciting and gratifying—a fine first novel.

History, action, the supernatural and intelligent discourse; this novel holds something for everyone.