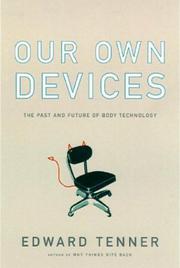 The Past and Future of Body Technology

A satisfying tale of chairs, shoelaces, spectacles, and other everyday technology that “helps shape how we use our bodies.”

Like his mentor Donald Norman, former Princeton University Press science editor and historian of technology Tenner (Why Things Bite Back, 1998) has a fascination for the unintended consequences of not-quite-thought-through innovations. Some, he argues, have altered our bodies and minds in unanticipated ways, sometimes culturally conditioned. Americans have been wearing flip-flops, for instance, only since the time of the Korean War, and we tend to keep a smaller angle between foot and sandal than do the Japanese, who land “not with the heel strike characteristic of the American subjects but with the forefoot of flat-footed, a technique that does not absorb the shock as effectively.” Chalk one up to American ingenuity, then, and watch for shock absorbers in the next generation of zoris—a type of shoe, Tenner writes, that has also yielded an ecological mess, with millions of discarded flip-flops washing up on Pacific beaches to crowd out shorebirds and shellfish. Elsewhere, among many other matters that touch on various bits of our beings, Tenner considers the history of reclining, showing effectively that taking meals while resting on one elbow, in the manner of the Roman aristocracy, was quite hard work, and that students who study in bed get the same grades as those who diligently seat themselves at their desks. It’s all good stuff, if circuitous and a little zany. However, taking it all in is not always an easy ride, for in his rush to cram in information, Tenner can get awfully elliptical: the Maxim gun, he writes, “favored by European powers for suppressing colonial resistance in the nineteenth century, begat the rugged and portable Kalashnikov brandished by guerrillas and terrorists”—but, one wonders, how and when? His text suffers a little, too, from repetitiveness. Still, there is so much good and freshly presented material here, and Tenner is so refreshingly enthusiastic in the task, that these amount to quibbles.

A treat, all in all, for fans of technological history and would-be inventors.