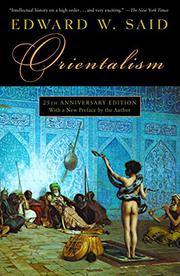 One may quibble with the title: this is a study of Islamic Orientalism solely, of Western representations of the Near East, with little or no direct reference to Persia, India, China, Japan.

Professor Said (Comparative Literature, Columbia) explains the limited focus as both methodological (coherence over exhaustiveness) and personal: he is an Arab Palestinian. But among Eastern civilizations, as he recognizes, Islam is a special case, particularly in relation to Christian Europe: a "fraudulent," competing religion (doggedly miscalled Mohammedanism), a longstanding military threat, and all the more, therefore, as affront. Singularity, however, is no handicap to what is essentially a case study of Western ethno-centrism and its consequences, while the very persistence of the generalizing and dehumanizing attitudes that Said condemns, unparalleled in regard to either Africa or the Far East, argues the urgency of the enterprise. Drawing, most prominently, upon Foucault's history of pernicious ideas, Said traces the development of Orientalism from Silvestre de Sacy's fragmentation of Oriental culture into "a canon of textual objects" and Ernest Renan's incorporation of the fragments into the new comparative philology: "the Orient's contemporary relevance [was] to be simply as material for European investigation." Ascribed traits—passivity, eroticism, etc.—became fixed; travelers, ostensibly sympathetic, added exotic tales; and the presumed inferiority of Islam served as the pretext for its political domination, its supposed backwardness the excuse for economic intervention (with even Karl Marx writing of England's "regenerating" mission in India). Not until after World War II does Islam enter the American consciousness, and then—with Arab specialists in attendance—as "the disrupter of Israel's and the West's existence." Said's recent citations are devastating, and add force to his final challenge: how to avoid all categorization of one people by another?

The book is redundant and not always reasonable, but bound to cut a wide swath and leave its mark.