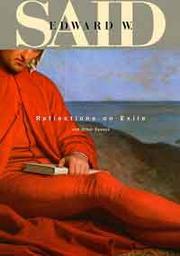 A compilation of 35 years’ worth of critical essays from one of the boldest and most articulate cultural theorists alive today.

For those who know Said (The End of the Peace Process, p.365, etc.) foremost as an outspoken and controversial advocate of Palestine, the breadth of intellectual curiosity and erudition manifest in these collected works will come as a pleasant surprise. Not until halfway through the anthology is there any mention of Palestine, and even in those essays that deal with his homeland, the author uses his unparalleled knowledge of the subject to illustrate larger points about anthropology, human rights, or nationalism. Writing on the works and lives of such cultural, literary, and political icons as Conrad, Nietzche, Vico, Foucault, Hemingway, Blackmur, Mahfouz, Melville, Schumann, Chopin, Orwell, Lipmman, and Merleau-Ponty, Said demonstrates that he is indeed a modern teacher and critic of the highest order. For readers who are more familiar with his works, he has included several essays that directly respond to the specific arguments of his critics (including “Orientalism Reconsidered,” “Traveling Theory Reconsidered,” and “Representing the Colonized,” among others). Said also offers an elegant demonstration of the depth and complexity of post-colonial studies, and he points out in his introduction that much of the material that defines this field (which he did much to create) “stands in contrast to politics.” And yet, even the least political of his essays further his goal: to deprive us of our complacency by reminding us again and again that all knowledge is mediated by power, and no one is immune to its balance.

A fascinating exploration of post-colonialism as seen through the eyes of its progenitor.