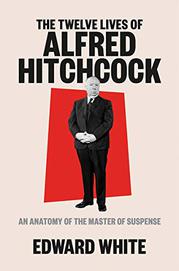 THE TWELVE LIVES OF ALFRED HITCHCOCK

An Anatomy of the Master of Suspense

A fresh assessment of the legendary director.

Following The Tastemaker, his outstanding biography of Carl Van Vechten, White takes on another titanic figure in the arts. The author plumbs Hitchcock’s films and TV shows to reinforce his view that he was a man of many contradictions, “usually complex, often troubling, but always vital.” White breaks down his subject’s psyche into 12 “lives,” beginning with “The Boy Who Couldn’t Grow Up,” which delves into his childhood trauma, “dread of authority,” and the “lifelong fascination with cruelty and violence that fueled his creativity.” In “The Murderer,” White posits that to “crack the Hitchcock code there’s no better place to start than at the grisly end,” as he leads us down a bloody path that runs from The Lodger to Psycho. The author reveals Hitchcock’s ability to promote his brand and create a “personal mythology.” In “The Womanizer,” White explores Hitchcock’s complex, contradictory relationships with women as a “creator and controller,” best seen in Vertigo, and his dependence on his wife, Alma. Discussing Shadow of a Doubt, “a point of continuity between the two halves of his career” gives White the opportunity to point out that the “most insistent theme of his work is a seemingly happy home cruelly torn asunder.” Examining Rear Window, which the director considered his “most cinematic” film, the author notes now “Hitchcock knew the power one could command by looking—and by denying others the opportunity to look.” It was the success of his two TV shows that helped create the “Entertainer,” and “The Pioneer” neatly shows how “each of his works is in deep conversation with the rest.” Hitchcock “The Londoner”—White is especially good on the director’s early English films—and the Catholic “Man of God” complete the 12 lives. Although the author doesn’t uncover much groundbreaking information, he presents the man and his films in a readable, entertaining package.

An incisive literary autopsy of the Master of Suspense.