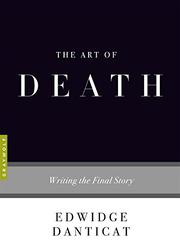 THE ART OF DEATH

A guide to writing—and reading—about death.

National Book Critics Circle Award winner Danticat (Claire of the Sea Light, 2013, etc.) adds to “The Art of” series with this work on how writers approach the topics of death and dying. Though the book is slim, it is overarching and broad in scope. Drawing on an array of writers, Danticat presents a wide range of approaches to death, including her own. Having written extensively about her mother’s death, for which she was present, the author lends a deeply personal touch to this study. She truly finds her stride after first surrounding readers with the almost impossible depth of her topic. Though not tied to a structure, Danticat explores the varieties of death and how each one is approached by writers. Suicide, execution, natural death, and accidental death all receive attention. Collective deaths also play a role, especially 9/11 and the Haitian earthquake of 2010. The author also examines suicide through the works of writers as diverse as Tolstoy, Faulkner, Albert Camus, Dylan Thomas, Zora Neale Hurston, Christopher Hitchens, and Toni Morrison. For executions, she shares the wisdom of Mumia Abu-Jamal, a death row inmate. Regarding death as an all-encompassing end to life, she smartly draws from Gabriel García Márquez. Most movingly, Danticat brings her audience into the very private realm of her own mother’s death from cancer. She writes of the tests, the diagnosis, the decline, and the final hours and moments as her mother slipped away. Though faith and fear both come up in this book, they are not highlighted. This work is more about how death is described in literature, and the author asks if we really can describe it adequately at all.

Danticat takes on an unpleasant topic with sensitivity and passion.