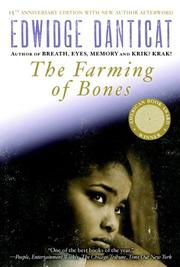 THE FARMING OF BONES

A strong second novel from the Haitian-born author whose debut, Breath, Eyes, Memory (1994), was recently anointed by Oprah, and whose story collection, Krik ? Krak !, won the National Book Award in 1995. Danticat’s subject is the 1937 massacre by Dominican islanders of Haitians living within their borders, at the command of Dominican dictator Trujillo—as experienced, and then remembered many years afterward, by the story’s narrator, Haitian maidservant Amabelle Desir. In the lyrically written opening section, Amabelle’s intimate moments with her lover, sugarcane worker Sebastien Onius (the two of them share memories of their deceased parents), are counterpointed against her submissive relationship with Senora Valencia, the wife of a Dominican army officer whose own loss of a child subtly foreshadows the many disasters to come. The long middle of the story describes the despised and terrified Haitians’ extended march back to their own country, during which Amabelle and Sebastien are separated. In the meditative last third (almost devoid, unfortunately, of dramatic tension), set a quarter-century later, Amabelle finally makes her peace with her bereavement, and, after an emotional reunion with Senora Valencia, passively accepts the fate she’s been prepared for by her contemporaries and forebears alike. Danticat tells this sorrowful tale in rich, lush prose that veers, often very suddenly, between rigidly controlled understatement and feverish emotionalism. Her word pictures are extraordinarily precise and compelling, as in a representative description of fires set to clear harvested cane fields: “The smell of burning soil and molasses invaded the air, dry grass and weeds crackling and shooting sparks, vultures circling low, looking for rats and lizards escaping the blaze.— Though it loses intensity as it proceeds, here’s more than sufficient passion, color, and empathy to confirm Danticat’s high standing among our more gifted younger writers.