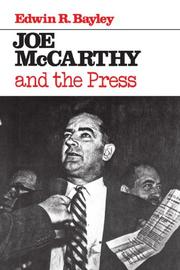 JOE McCARTHY AND THE PRESS

Did the press make Joe McCarthy, as often alleged? To the extent that they allowed themselves to be manipulated by him, Bayley concludes, especially in the crucial month after the Wheeling 205-Communists-in-the-State-Department speech. This is an exacting, bell-ringing study of the interface between journalism and politics--by an expert witness: Bayley, now dean of the Graduate School of Journalism at Berkeley, was a political reporter for the (uncowed) Milwaukee Journal during the Wisconsin senator's heyday; he also comes, like McCarthy, from Appleton (in a footnote, he recalls teasing McCarthy--a ""hick,"" in bib overalls--as a boy: ""He'd lunge at us and we'd run""). So the opening chapter, ""When It All Started,"" sounds all sorts of pertinent themes--including what McCarthy and his constituency absorbed from the local press (notably, the ""antimilitarism and isolationism"" of the Chicago Tribune and Appleton dally) and what he learned of its ""practical workings"" from early newspaperman-buddies. Here, too, Bayley first suggests that McCarthy was not really serious (in one way or another, he said as much), merely a compulsive attention-getter. But the backbone of the book is Bayley's close examination of how the press covered McCarthy nationally day-by-day--amplified by his own understanding of why. After the Wheeling speech, McCarthy switched figures (205, 207, 4, 57, 81) and threw out charges with confusing speed and imprecision; a few editors grew suspicious and took up the fight against him; most papers and especially the wire services--flummoxed, but sensitive to the ""Communist"" issue and respectful of a US senator--simply reported what he was saying, often going further than he did (particularly in the headlines) to make the mysterious allegations into hard news. ""Objectivity"" was not to blame, says Bayley, then or later: at the outset, no one asked to see the (nonexistent) list of Communists; later, McCarthy learned how to exploit press deadlines so that rebuttals were always offset by new charges--and to exploit the wire services' inability to hold up a story for verification. But opposition to him was not futile: in a detailed analysis of his 1952 race for reelection, Bayley demonstrates that he did suffer in those parts of Wisconsin where the local papers opposed him. And, nationally, his support endured longest in the Western hinterlands--where his doings were least reported altogether. With attention also to McCarthy and TV (and a last, startling Bayley anecdote about an aborted McCarthy about-face), an important study of the press under duress--its limitations and capabilities and potential today.