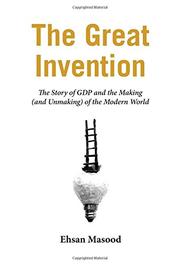 We all know that statistics can lie. But what about one of the greatest statistical measures of all, Gross Domestic Product?

British science writer and BBC presenter Masood (International Science Policy/Imperial Coll. London; Science and Islam: A History, 2008, etc.) offers a provocation from start to finish, one that, though accessible to lay readers, will be most meaningful to those concerned with economic policy and development. GDP, he argues, is by the nature of its definition tilted to advanced economies, and it layers in hedges such as “effective demand” to condition tried-and-true formulas of the past. In the postwar era, he writes, the predecessor of the Organization for Economic Co-operation and Development pushed the use of the Depression-era GDP measure “as a system of accounting to assure richer nations that the assistance they were providing under the Marshall Plan wasn’t being misspent and was contributing to the growth of economies.” The problem, as development economists such as Mahbub ul Haq have argued, is that GDP doesn’t account for aspects of the unofficial economy that are so important in developing countries, such as barter and job sharing. Neither does it account for externalities such as the value of available clean water, bringing the concept of GDP under criticism from environmental activists as well as economists. Masood examines the history and evolution of GDP, which seems to have the overall effect of making rich nations seem richer and poor nations poorer than they actually are and which therefore makes rich nations resistant to modifying or dropping it as a standard. The author further considers alternate methods of gauging economic activity, such as ul Haq’s Human Development Index and the so-called Gross National Happiness standard, which are useful in quantifying “job satisfaction, volunteering, friendships, or other kinds of life satisfaction that do not involve money.”

A welcome cross-examination of a concept that seems as natural as sunlight but that, like every other human construct, is shot through with both politics and flaws.