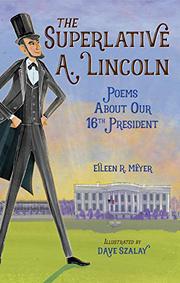 THE SUPERLATIVE A. LINCOLN

Poems About Our 16th President

Telling Abraham Lincoln’s story in poetry is a tall order, but Meyer pulls it off.

“Come read about a legend— / the greatest of the greats; / from a poor boy in the backwoods / to a president, first-rate.” The title of each celebratory poem offers a yearbook-style superlative about our 16th president: “Best Wrestler,” “Best Lumberjack,” “Who’s Tallest?” Each poem is accompanied by a brief paragraph providing context for the poem. The rhyming poems are mostly in third person, though one is in the voice of Lincoln’s stovepipe hat, and there’s another from Grace Bedell, who wrote to the president encouraging him to grow a beard. The upbeat poems and string of superlatives, however, leave little room for more nuanced explanations, as in “Strongest Conviction: Signing the Emancipation,” from which readers learn that Lincoln freed the slaves but not that they weren’t really free yet nor that his commitment to abolition was limited. The portrait orientation of the volume is the right choice for our tall president, and Szalay’s attractive, folksy art manages to capture the homespun spirit of the poems. Brown faces appear in the crowd at the Lincoln Memorial, and President Barack Obama and Frederick Douglass make appearances. The collection will make excellent reading aloud in the classroom, a few a day.

A tip of the stovepipe hat for making a poetry biography so much fun.