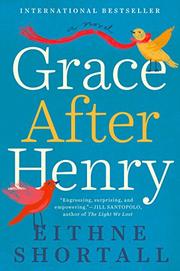 A young woman in Dublin handles a confusing and surprising gain after a deep and personal loss.

After her partner, Henry, dies in a bike accident, Grace spends nearly three months emotionally and physically shut down. Then, with lots of prodding from her parents and best friend, she attempts the barest requirements of living again: going to her job as chef at a local cafe, visiting Henry’s grave, and furnishing the house the two were buying when he died. She thinks she sees Henry everywhere and has to convince herself it’s just her grieving brain playing tricks on her, until he shows up, on her doorstep, in the flesh. But this isn’t Henry, either. It’s Andy, the twin brother from Down Under no one knew existed. Once the initial shock has dropped to a simmer, Grace allows herself to find comfort in Andy’s similarities to Henry while Andy finds comfort seeing the type of life he might have had if his restless, adoptive single mom hadn’t moved him to Australia. They both dabble in magical thinking, teasing at this soap-opera setup to see if it might go in the most soap-opera direction. But Grace (who narrates the bulk of the book) has a straightforward, often droll tone, and Shortall in general focuses on small, daily details over sweeping, dramatic ones. This is a blessing and a curse; it tempers the high drama of the plot into something sweet and (almost) believable. But in the dance between the two she loses sight of the story of grief, which deserves more attention.

Strongest in its depiction of modern Dublin characters and their entertaining interactions, muddled when it comes to the meat of the story.