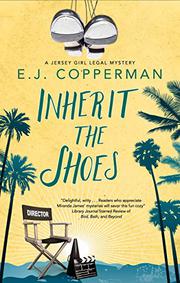 Prolific Copperman launches a new series starring a defense attorney who could give Perry Mason a run for his money.

Tired of prosecuting low-level grifters in New Jersey, Sandy Moss heads to sunny LA to join Seaton, Taylor, Evans, and Bach, whose practice is limited to squeaky-clean corporate cases. Divorce settlements are as down and dirty as Seaton, Taylor gets, and then only for high-value clients like Pat Dunwoody, the star of TV legal thriller Legality, who’s looking for release from his promiscuous wife, singer Patsy DeNunzio. Sandy’s first assignment is to sit silently next to senior partner Junius Bach during the contentious Dunwoody-DeNunzio property negotiations, a task she fails miserably by revealing to opposing counsel her side’s chief strategy. Junius is livid, but Pat so admires Sandy’s spunk that he demands that Seaton, Taylor assign her to defend him after Patsy’s inevitable murder. Dunwoody, who reverts to his stage name of Patrick McNabb after his wife’s death, seems deeply confused about the difference between being a lawyer and playing one on TV. Not only is he unfazed by Sandy’s complete lack of experience as a defense attorney (after all, if she prosecuted cases, shouldn’t she know how to defend them?), he doesn’t pay much attention to the judge’s preferences, like having defendants not leave the country while they’re awaiting trial. Even with the help of her new maybe-boyfriend, paralegal Evan D’Arbanville, and her best friend, Angie, who arrives unexpectedly from New Jersey, Sandy has her hands full keeping a lid on irrepressible McNabb, and readers won’t want to miss a minute of the mayhem.

In or out of the courtroom, Copperman’s right on the money.