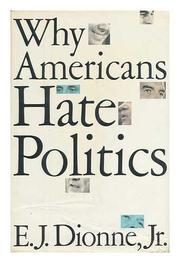 Here, Washington Post reporter Dionne describes how strident ideologuesof both the liberal left and the conservative rightshave polarized politics and crowded out serious debate and reasonable compromise about fundamental problems. The resultant timidity or gridlock politics, he argues brilliantly, has nothing to do with what really matters to most Americans, who have learned to hate politics and politicians. Dionne finds it ironic that with people all over the world demanding democracy, Americans are becoming disillusioned wit their elected representatives. He sees Japan, Germany, and others grabbing ever-larger shares of the US market, with Americans losing their jobs in uncompetitive corporate mergers even as left and right ideologues dominate the media by screaming at each other about race and sex quotes, affirmative action, Willie Horton, and the Pledge of Allegiance. He finds liberals using the courts instead of the legislature to gain equality, in practice leading to unintended injustices, forced busing that promotes the flight of urban whites and brings more segregation, affirmative action that burdens poor white makes, and bilingual education that leaves Spanish-speaking children less able to compete. Similarly, Dionne accuses conservatives of not facing basic problemssuch as the savings-and-loan disaster, the almost unaffordable health-care system, the expensive educational system that turns out more semiliterates, etc. An important book that sheds much light on the ironies and flaws of American politics while warning that democracy may be failing in the US because of powerful special-interest groups and voter apathy.