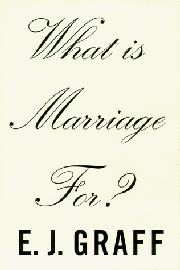 WHAT IS MARRIAGE FOR?

Why wed? As a financial investment? To have sex? To reproduce the species? To link two families together? This highly informative and enjoyable romp through the history of marriage in Western Europe and the United States looks at all these reasons and more.

Graff, a Boston-based journalist who has written for such diverse publications as the New York Times, Ms., and Out, has organized her book into six thematic chapters, entitled “Money,” “Sex,” “Babies,” “Kin,” “Order,” and “Heart.” Her progression is telling, for part of Graff’s story concerns the long evolution of marriage from an investment in property (including the bride’s womb) and security to what she refers to as the “compassionate marriage.” A second major theme is the growth of women’s rights, both in the decision to wed another—the Roman wedding ceremony usually involved an exchange of statements between the groom and his father-in-law—and, far more recently, in terms of property and custody of children in case of divorce. Tracing three broad religious perspectives, Graff, perhaps somewhat simplistically, notes the premodern Catholic antimarriage focus on celibacy, the early Protestant celebration of marriage, provided it involved “reproduction,” and the distinctly modern Jewish emphasis on “refreshment” (promarriage and prosex for the purpose of happiness and intimacy). She occasionally digresses a bit too long from her main themes, as when discussing the 19th-century Mormon practice of polygamy. While she has done a great deal of research, she covers so much religion and social and legal history that, inevitably, she cites some dubious statistics ("roughly 20 percent of adult women report having been sexually abused as children") and occasionally simplifies a religious law or historical practice. Graff also argues persuasively, if too repetitively, for the validity of gay and lesbian marriage.

Overall, she has produced a well-organized work of thoughtful popular history that displays considerable wit and verve, and that is in equal measure instructive and entertaining.