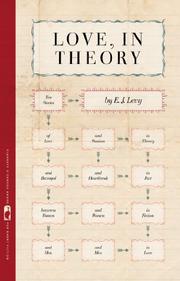 In Levy’s (Amazons: A Love Story, 2012) 10 lyrical gems, disparate characters struggle without someone to love, and some are paralyzed and shocked by the loss of affection. In “Theory of Transportation,” Thomas sleepwalks to a movie theater on the night of his lover’s death. In “The Best Way Not to Freeze,” a reclusive English professor, Katie, falls for Ben, a man of the world who teaches her how to portage a canoe in the wilderness, but after invigorating her life, he returns to his ex. Most of Levy’s stories are peopled with highly educated characters interested in highbrow subjects—Nietzsche, French Impressionism, Persian rugs. They can’t help intellectualizing the confusing whys and hows of love. For example, in “Theory of Enlightenment,” Gil leaves Renee, trading their discussions of botany and Mahler for yogic asanas and incense at a Buddhist retreat. “Sometimes one plus one can equal less than two,” Gil tells her. Levy’s prose is deeply philosophical and sometimes heady but never pompous. It depicts infidelity and loss yet avoids melancholy and sentimentality, as the characters often don’t have the expected reactions to difficulties—they are too cerebral for that. Levy beautifully explores the pitfalls of domestic life in “Gravity,” in which Richard attends his sister’s second wedding, as do his mother, father and father’s mistress. The bride is nearly inconsequential in this poignant vignette; instead, the story focuses on Richard, who evaluates his own relationship in light of his familial peculiarities. The final story, “Theory of Dramatic Action,” employs a second-person narrator, as if to finally address the reader directly; it’s also the only one bordering on edgy, as a dominatrix tempts the heroine. Levy’s taut prose, intelligence and emotional acuity penetrate nearly every sentence. Fans of Amy Bloom’s short stories are likely to enjoy Levy’s work. Readers will likely savor this collection, a 2011 winner of the Flannery O’Connor Award for Short Fiction, for its intoxicating language and introspection.

A smart, insightful collection of stories about life and love.