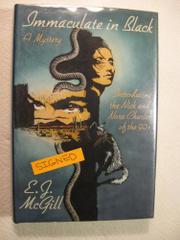 Logically inconsistent first novel featuring a bridge-playing husband-and-wife detective team, the Shermans, who, here, try to figure out what happened to naughty Shelly Egan in the seven minutes that elapsed between her panicky 911 call and her death by strangulation. Prime suspect Raymund Bruner, her porn-loving uncle, is jailed, but the Shermans uncover other (outlandish) possibilitiesincluding an auntie living with a wacky religious sect; a sleazy porn-peddler; and Algerian triplets. Meanwhile a bridge tournament is in progress; the city hall is strafed (one person dies); a bomb totals the Shermans' car, and various techno- specialist analyze the 911 tape. The solution, arrived at over the bridge tablewith an assist from the Shermans' catblithely lumps together identity switches, x-rated behavior, and scientific folderol. Redeemed only by its subplot: the grief-stricken Shermans coming to terms, at last, with the loss of their son some years before.