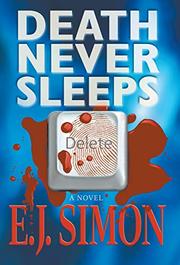 In Simon’s debut thriller, a corporate CEO takes over a gambling and loan-sharking operation from his murdered brother.

Michael Nicholas, CEO of Gibraltar Financial, has done his best to steer clear of his brother Alex’s illegal business and shady cohorts. But when his brother is gunned down, his widow, Donna, needs Michael’s expertise to help collect his loans, pay a $700,000 debt to a bettor, and find another few million dollars that Alex has stashed. It’s no walk in the park: The bettor, a thug appropriately named Sharkey, demands his payment while boasting about how he could kill Michael in a public place. However, Michael might be able to find some answers by using technology that Alex left behind: an artificial intelligence, patterned after his brother’s image and personality, that’s been contacting Michael with cryptic messages. Soon Michael becomes obsessed with handling Alex’s operations and begins shirking his CEO duties, but it turns out that the AI can assist with the business. Simon’s novel has elements of a mystery, as there are other murders, a kidnapping and threats against Michael and his wife, Samantha. However, Michael is more a financial manager than an investigator, and the mystery unravels mostly on its own. Still, even when Michael isn’t actively looking for clues, the story gleefully offers an array of suspects: Alex had two ex-wives and a hairdresser lover, Jennifer—who was also having sex with a French movie star. Simon keeps the plot’s technological aspects simple, never explaining exactly how the AI works. At times, Simon does this cheekily, as when Jennifer says that Alex upgraded a laptop by having “these really smart people customize it or something.” The story also takes nerve-wracking turns; during a terrifying home invasion at Michael and Samantha’s house, for example, a murderer tells them point-blank: “I’m going to kill you.” Some mysteries remain unresolved at the end—including at least one murder—but a planned sequel should placate frustrated readers.

A fine technological thriller that only gets better as it goes along.