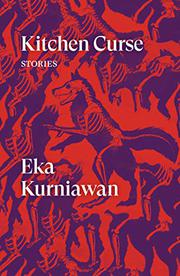 Little fables of degradation from one of Indonesia’s most famous authors.

Kurniawan earned international acclaim for his epic exploration of his country’s history and folklore, Beauty Is a Wound (2015). This was the author’s first work to be published in English, and translations of his novels that have appeared since then have been increasingly disappointing. The short fictions collected in this volume continue that unfortunate trend. Kurniawan has never been afraid to shy away from the grotesque and the squalid, but, with stories like “Graffiti in the Toilet” and “Don’t Piss Here,” he seems to be daring readers to look away. More importantly, these very brief tales seem to be gross for the sake of being gross. The violence and filth and sexual transgression in Beauty Is a Wound served a larger purpose in depicting a country with a complicated, troubled past and contemporary political and economic challenges. To the extent that there is a hint of substantive content, it’s difficult to discern how much of it will be of interest only to an Indonesian audience. For example, the story “Rotten Stench” describes—in one seven-page sentence—a massacre in the fictional city of Halimunda that echoes a similar atrocity that occurred 18 years earlier. It’s sickening, certainly, and the structural choice Kurniawan makes propels us forward even when we might want to stop, and one might make the argument that the author’s decision to provide almost no context for these scenes of chickens picking at the genitals of corpses (the word “genitals” appears a lot in these stories) and “flesh and blood that had congealed into porridge” suggests a certain nauseating universality, but…how many readers will understand the barely enumerated distinctions between these two massacres, and how many need a graphic lesson in why mass murder is, generally speaking, bad?

Crude and pointless—unless crudity is the point.