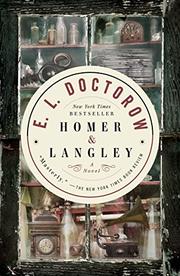 Brothers live together in a decaying New York City mansion as history marches on in the latest from Doctorow (The March, 2005, etc.).

Brothers Homer and Langley share a moneyed childhood in relative bliss, although narrator Homer is slowly going blind. Then both Homer’s parents succumb to the Spanish flu epidemic in 1918, shortly before older brother Langley returns from service in World War I damaged by mustard gas. Increasingly eccentric (or deranged), Langley devotes his life to organizing articles from the newspapers he collects and never throws away. Homer’s musical ambitions never come to much. Nor do his romantic affairs. Langley’s one marriage is a disaster. But the brothers’ lives touch on history, or its surface accoutrements, with a vengeance. Homer plays accompaniment for silent movies. Langley drives a Model T into the dining room. In the ’20s they frequent speakeasies, where they meet a stereotypical gangster playboy who by the ’50s has become more of a stereotypical Mafioso. Their African-American cook has a New Orleans jazz musician grandson. During the Depression the brothers throw “tea dances” to make extra money. The FBI whisk away a nice Japanese couple in the brothers’ employ to a World War II internment camp. By the ’50s Langley has acquired a television and a typewriter collection. By the ’60s the brothers are taking in hippies as well as feral cats. Later Homer is dismayed to discover the young girl he once mentored as a musician and secretly loved has become an activist nun murdered in South America. As the brothers’ funds shrink and the Fifth Avenue mansion they inherited falls into decay, the parallel to Gray Gardens comes to mind, particularly since an aging Homer types his memories on a Braille typewriter for a French journalist named Jacqueline.

Usually a master at incorporating history into rich fiction, Doctorow offers few insights here and a narrator/hero who is never more than a cipher.