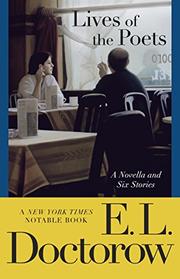 LIVES OF THE POETS

A Novella And Six Stories

What I need is a master guide to the wisdom, an exclusive service in the ideal location of the world, say, where you give all your money and all you ever hope to have, and in return you receive a generosity of beneficent hygienically balanced natural unradiated lifelight and you get to live and write a minimum hundred and fifty years, give or take a decade, and the cock never fails you." So writes Jonathan, Doctorow's angst-ridden alter ego in the title novella here, as he begins his free-associative ramble through the social, sexual, and political twitchings of a middle-aged N.Y. writer. Jonathan, spending more and more time away from his fastidious Connecticut wife, holing up in a Soho studio, contemplates all the crumbling marriages around them, "the phenomenon of the neither married nor divorced but no longer entirely together . . . I see the small spaces men end up with for their lives, and there is terror, and the disgusted reproach of children, and the lapse into dereliction of men who have taken down their establishements, and I know I risk all that." He broods on death, immigration, the subways, his health, crime, the CIA, aging, artists' careers, his long-dead father, Rilke's androgyny, his own iffy affair with a jet-hopping, independent woman ("CIA cunt"), the fates of Wilhelm Reich, Linus Pauling, Bishop Pike. And, providing a slender narrative thread, there's a moral/political decision for Jonathan to make: should he or shouldn't he provide illegal sanctuary to rebel fugitives from El Salvador? (He should: "Look, my country, what you've done to me, what I have to do to live with myself.") Throughout, there's a fundamental sentimentality beneath Doctorow's dour, sardonic observations and anecdotes; the attempts to churn up an eclectic socio-cultural swirl around one writer's psyche sometimes reads like pale-imitation Mailer, an artificial gathering of notebook jottings. (At least two images or anecdotes appear, in nearly identical form, in other stories here.) Still, with enough basic material for a humdrum middle-aged-writer novel compressed into 60 dense pages, this is an undeniably lively and varied mosaic, shards of existential anguish side by side with tidbits of literary gossip and mini-editorials. And, while five of the shorter pieces are Doctorow at his most labored and schematic (studies in sexual psychopathology, a fable/history of the American outcast-type), "The Writer in the Family" is a plain, affecting memoir of writer Jonathan as a Bronx teenager—stunned by his father's death, making discoveries about his parents' marriage, using his writing ability to sustain (and then destroy) family myths. In sum: a slight collection, lacking a distinctive voice—but with modest rewards for Doctorow's more cerebral and/or political admirers.