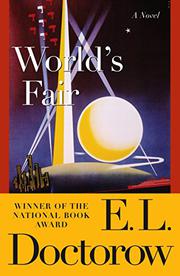 Doctorow continues his long romance with the past in this microcosmic story of a sensitive boy's early life (up to the fifth grade) in the Bronx of the 1930's. What might have been merely a long, warm bath in nostalgia becomes—through the sheer craft of the book—an evocative meditation on time past, and, by constant implication, time present. Edgar Altschuler grows up in a world now gone (a world of leather shaving strops and the horse-drawn carts of vegetable vendors), and his story itself, however compelling, is nothing if not familiar: as he grows up, his parents offer him a polarity of great extremes within which he must somehow shape his own identity. His father is adventurous, liberal-minded, and idealistically impulsive, but not always honest or sexually faithful, and he comes close (among other things, he loses his music-store business) to letting the family drift toward ruin. The quietly suffering mother—desirous of order and propriety and continuity—does what she can to shore up the family's lives against these potential ruins. Meanwhile, world history moves on, always just off-stage, but hinted at again and again, in ways both large and small (Edgar almost dies of a burst appendix, and thus learns of mortality; he witnesses the bizarre schoolyard death of a woman by car accident; and—in one of the book's most wondrous of many wondrous passages—he watches the great airship Hindenburg float marvellously through the sky en route to its disastrous and fiery end). Late in the book, Edgar enters an essay contest on the subject of The Typical American Boy (he writes: "He is kind. . . He knows the value of a dollar. He looks death in the face"). The essay wins honorable mention, and Edgar and his family are given free passes to the World's Fair, where they gaze upon the marvels of a clean, trim, idealized future—while clouds of cruelty and doom (the year is 1940) gather around the edges of all the world. With few overt concessions to the nostalgia-trade (nylon stockings are "new"), this is a delicately-faceted work, perhaps Doctorow's most austere and uncompromised since The Book of Daniel, though far more humble in its material—a quiet homage to a domestic world now quite gone, and one that makes our own world all the more frightening and awesome by its absence. Heavy with literary indebtedness, the book nevertheless, by its consistency of both passion and craft, achieves the radiance and sinuosity of a masterpiece.