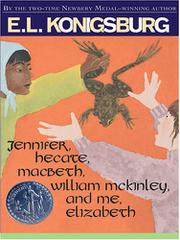 Who!?!! Me, first: Elizabeth, apprentice witch, promoted to journeyman, dismissed for sentimentality; lonely in a new school, discovering the satisfaction of being different, becoming a friend. Jennifer, master witch, familiar of Hecate and Macbeth, mentor of Elizabeth; also her fellow fifth grader at William McKinley School, later her friend. . . In the tart Juvenile vernacular of a New York suburb, Elizabeth recounts the rigors and rewards of her apprenticeship: raw eggs and raw onion sandwiches (recipe given); thirteen taboos ("Never cut my hair. . . Never wear shoes in the house on Sundays"); a flying potion compounded of such exotica as snowballs from the deep freeze and fingernail parings. Gradually, Elizabeth comes to resent Jennifer's domination, and when Jennifer is about to drop Hilary Ezra, their pet toad, into the pot of potion, she rebels. The girls part in anger, but come together again on the next-to-the-last page and laugh at their former obfuscations; they are no longer would-be witches, they are just "good friends." Elizabeth, expressing her disgust at pinching relatives and posturing schoolmates, is a self-proclaimed pest and problem to her parents: the reader empathizes immediately. Jennifer, who happens to be Negro, is likely to remain an enigma (of some fascination) to her contemporaries, as she is to Elizabeth. The sudden resolution of their relationship is unconvincing, and the adults are either satirized sharply or borne stoically, but Elizabeth's narrative has considerable pertinence and vitality. With the important difference that the girls do not hurt anyone, this raises some of the questions attending the reception of Harriet the Spy. On balance, we find it a fresh, funny spoof of the adult Establishment and the cliches of conjuring.