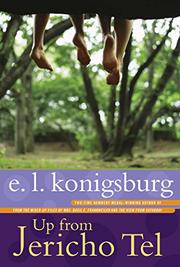 UP FROM JERICHO TEL

In Konigsburg's novel, her two talented child protagonists, Jeanmarie and Malcolm, learn the three requirements for fame in a sometimes whimsical, sometimes mysterious tale. A study in ambition—its origins and effects—the story integrates a fantasy into reality when Jeanmarie and Malcolm meet Tallulah, a once-famous, long-dead actress. From her incorporeal luxurious room below Jericho Tel, Tallulah gives the children assignments to carry out "Topside" using a magic invisibility. The assignment: find Tallulah's street-performer friends and her servants who were present at the moment of her death and discover who took her precious Regina Stone. As the story opens, Jeanmarie and Malcolm, two lonely latchkey children, form an uneasy partnership when they create an animal cemetery, which they call Jericho Tel. Malcolm is not shy in declaring his talents of neatness and logical thinking, and his goal of becoming a famous chemist or physicist. Jeanmarie confides her ambition of being a famous actress. "You may not be pretty enough, but you sure are peculiar enough" is Malcolm's reaction, though he thinks she does have a talent for dramatizing things. Tallulah's influence on the two is reflected in her sayings which precede each chapter. For example, "The difference between going to school and getting an education is the difference between picking an apple and eating it." Or "A happy person strikes a balance between doing good and doing well." Or "If you must complain in public, either be amusing or outrageous." The first two essentials for stardom, the children learn, are talent and timing. The third requirement they realize when they discover the thief of the Regina Stone necklace from among the suspects: a ventriloquist, a singer, a record-shop owner, or the former butler; all were present at the moment of Tallulah's death. Konigsburg has once again brought her readers a set of memorable characters and a unique perspective on children's hopes and ambitions. The story is told with a light touch but contains some substance as well—a good exploration of aspirations to and attainment of fame.