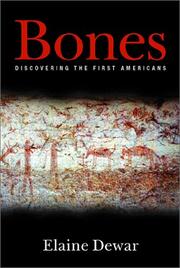 Where did North Americans come from way back when, asks Canadian journalist Dewar (Cloak of Green, not reviewed, etc.), in this eye-opening study for laypeople that debates the merits of archaeological theories swirling about the question.

Archaeological orthodoxy has it that the ancestors of Native Americans entered the continent over the Bering Land Bridge at the end of the last Ice Age, some 10,000 years ago. But, as Dewar illustrates in this smoothly written overview of the conflicting evidence, there is plenty of material that suggests otherwise. There are the Caucasoid features of 8000+-year-old Kennewick Man; the mitochondrial DNA work that found examples of North American populations without a common ancestor in Asia; hookworm evidence in early South Americans that could not have survived a Beringian crossing; and ancient bones with African features, plus lots more niggling little questions that simply have no truck with the established picture. Dewar travels to all the locales, interviews all the principals, comes at the problem from many angles: remains, ancient art, oral traditions, forensic archaeology, international law, racism. This is all fascinating stuff, and Dewar writes it up with the flair of a good mystery—yet what rankles and haunts the reader long after the all the new theories have been posited are Dewar's condemnations of the field of archaeological study: all the petty squabbles and beard-pulling; the narrow-minded, fractious, timid, possessive scientists who don't even publish their findings; of government interference and the deference to vested interests; of the withheld reports and outright theft of evidence and private digs and scattered materials that amount to a scandal; and of the miserable politics—land, political, and academic—that taints everything it touches.

The New World may well be another Old World, and hoary parables may speak as loudly as DNA testing in the search to answer Dewar's question.