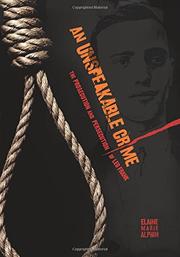 The Prosecution and Persecution of Leo Frank

Thirteen-year-old Mary Phagan, all dressed up like a society girl in Atlanta on Saturday morning, April 26, 1913, never made it to the Confederate Memorial Day parade. Her body was found in the basement of the National Pencil Company. She had been badly beaten and apparently raped. At first, the police “did what they always do in Georgia—arrested a Negro,” as reporter Harold Ross later wrote, but as the case became a media frenzy, politically ambitious Hugh Dorsey, the prosecutor, played on popular prejudice and went after Leo Frank, a Jewish, college-educated Yankee businessman and the pencil company’s superintendent. Alphin does a creditable job of unraveling the mess the trial became, a tangle of “lies heaped on lies,” and the rightly ambiguous title leaves readers wondering about two unspeakable crimes—the murder and the public lynching of Leo Frank. Each chapter opens with a dramatic quotation, and period photographs and reprints of newspaper stories contribute to a thorough accounting of a city’s judicial system at its worst. Fans of legal thrillers and courtroom dramas will find this outstanding. (list of major figures, timeline, glossary, further reading, author’s note, bibliography, source notes, index) (Nonfiction. 14 & up)