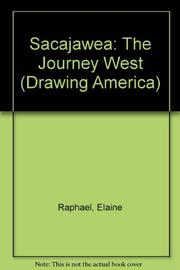 This latest addition to the Drawing America series tells the story of Lewis and Clark's young native guide, Sacajawea. When Sacajawea, Shoshoni Indian girl, is captured by raiders, it will be years before she is reunited with her tribe. Her new life with the Minnetaree is that of a slave. She remains in this situation for three years until she is sold to a French-Canadian fur trader. Raphael and Bolognese (Donkey, It's Snowing, 1981, etc.) then write that she is married at 13 to the trader, but not how she responds to these new circumstances. When a group of explorers headed by Lewis and Clark need a Shoshoni translator, they hire Sacajawea. The journey to her village is full of hardship, yet Sacajawea ``did not complain.'' She treats the men's wounds, finds food for them, and mends their clothing—all without a grumble. The eventual meeting between Sacajawea and her tribe is a success. Her brother, now chief, promises to supply the expedition with much-needed horses. Although she has finally come home, Sacajawea will not remain in her village. She decides that there is still the great ocean for her to see. This superficial version of Sacajawea's story is devoid of feeling, although the drawing lesson at the end adds a creative touch that the narrative lacks. (Biography/Picture book. 6-8)