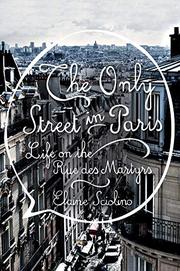 THE ONLY STREET IN PARIS

Life on the Rue des Martyrs

After taking a tart look at her adopted country in La Seduction (2011, etc.), Sciolino shows a softer side in this affectionate portrait of her Ninth Arrondissement neighborhood.

Not that the veteran foreign correspondent for the New York Times and Newsweek indulges in unbridled sentimentality. Yes, the author fell in love with her apartment when she walked into its cobblestoned courtyard and “was transported back to the first half of the nineteenth century,” and she praises the shop-lined rue des Martyrs 500 feet from her front door because it “has retained the feel of a small village.” But in an early chapter lamenting the closing of a family-run fish store, Sciolino acknowledges that the frozen fish sold for half the price at the local supermarket is actually pretty good. She still misses the chance to linger and talk fish at the old poissonnerie. She relishes the formal intimacy of relationships with the merchants, and her brisk, lucid prose conveys the charm of unspoken rules that govern all interactions: newcomers must prove they know the code before they too get the freshest piece of fish cut in the back room or the loan of a book they can’t afford to buy. Sciolino understands this mindset, because her Sicilian-American grandfather had the same distrust of strangers. Over the course of five years she became accepted enough to throw the wildly successful party bringing together the street’s two halves: the more gentrified lower portion in the Ninth, and the tawdrier, cheaper stretch that runs through Montmartre. “Le Potluck” closes the book on an elegiac note, but chapters in between also chronicle darker moments: a columnist who survived the January 2015 attack on Charlie Hebdo lives on the rue des Martyrs, and a high school down the way annually commemorates 19 students and one teacher killed by the Nazis.

A pungent evocation of the conflict and compromise between tradition and innovation that define modern urbanism.