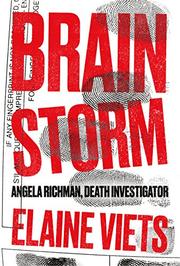 A death investigator battles to clear the neurosurgeon who saved her life.

Dr. Jeb Travis Tritt is far from wealthy Chouteau Forest, Missouri’s favorite son. A large man with a larger ego, he’s tolerated only by virtue of his marriage to a local debutante. But numerous affairs with nurses at Sisters of Sorrow Hospital have pretty much trashed that union, and Tritt may be on his way out. Angela Marie Richman, on the other hand, is a child of the Forest in the truest sense: she grew up on the Du Pres estate, where her parents were caretakers. Now, as death investigator, she’s been a pillar to the Forest elite in their darkest moments, like the night cousins Jordan Hobart and Jillian Du Pres crashed into Sandy Warburton’s red Ferrari with deadly results. But in her moment of need—when she came to the SOS emergency room with obvious symptoms—popular neurologist Porter Gravois sent her home as “too young and fit to have a stroke.” Only quick intervention by the arrogant Tritt saved her life. Now, as Angela starts her long recovery, she’s tormented not only by the cosmic conundrum of how kindly Dr. Gravois almost killed her while obnoxious Dr. Tritt saved her, but by the real-world puzzle of how to get her life together. Left bald and bloated by her treatment, awash in impenetrable medical bills, and plagued by doubts about her ability to function in her job, she leans increasingly on her best friend, pathologist Katherine Kelly Stern. But when Dr. Tritt is accused of murder, Angela gathers her scattered wits to prove she can still investigate a death, even one that’s personal.