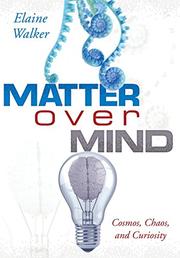 A panoramic account of the cosmos infers political and moral lessons for the whole of humanity.

Trained as a musician and raised by mathematicians, first-time author Walker merged the two interests in her master’s thesis, which explored the possibility of composing music based on chaos dynamics. Her interest in the intersection of physics and human creativity pervades her book, in which the author investigates the distance that separates the constitution of nature and the cognitive processes whereby human beings attempt to apprehend it. She finds that the universe turns out to be infinitely rich in character, comprised of patterns so multitudinous and complex as to elude any comprehensive human perception. In her view, abstract thought, while the root cause of humans’ progress as a species, employs the imposition of limited categories far too narrowly curtailed to comprehend the vastness of the cosmos. After providing a brief biographical account of her own developing interest in physics, Walker takes the reader on a tour of the universe, touching on a broad spectrum of topics, including dark matter and energy, the relativity of space and time, and the Big Bang theory. She then turns to humanity’s place within that tableau, considering the nature of consciousness, morality, and politics. Walker’s erudition is astounding—there is very little of intellectual interest that is not covered by this book, and she provides one of the most accessible introductions to chaos theory available. But that virtue doubles as a vice, since the volume stalls under the weight of its own ambitions; the author simply covers too much too briefly. In addition, her knowledge of moral and political theory is not on the same level as her impressive expertise in physics; for example, her account of the theoretical foundations of American government is respectable but not searching. There’s also a touch of naiveté in her optimism that a certain understanding of physics can transcend the ideological divisions of the left and the right: “We can even merge them into one holistic philosophy. And there is a way to accomplish this which is so simple and natural and good natured that I don’t understand why it isn’t staring us all in the face more plainly.” The prose is admirably clear, and the challenging but approachable accounts of modern physics avoid being overly “mathy.”

While the author overreaches, her wonderfully lucid explanations of modern physics often hit their marks.