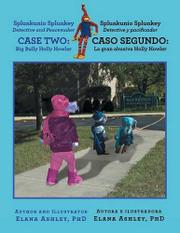 An alien detective and his elephant friends return in this second issue-based adventure for grade schoolers, filled with brightly colored photographs of puppet characters.

Ellie Elephant summons Splunkunio Splunkey, her alien friend who is a detective and peacemaker, because there is trouble at school that she doesn’t know how to handle. She explains that a new student is causing problems: “Big Bully Holly Howler. Nobody likes her!” Holly, a purple hippo, is taller than the other puppets: a long-haired zebra named Zena, Ellie and her friend Eli Elephant, a curly-haired lioness, and a pink hoodie-wearing tiger. Holly’s rude, cutting in line and stealing the basketball at recess. She swipes Ellie’s apple for their teacher, and pushes down Zena to take her wagon. Ellie and Eli rattle off a list of Holly’s wrongs, and young readers are likely to think that it’s clear why Holly doesn’t have any friends: she’s just not nice. But Splunkunio refuses to settle for the easy answer. He asks whether Holly acts badly to everyone, and wants to know whether she spends time with other students. When Ellie insists she must have friends somewhere, Splunkunio says, “Not everyone does. Especially people who act like bullies.” The alien urges the friends to treat Holly considerately, even if they continue to dislike her, then vanishes, assuring them they can handle this crisis on their own. Sure enough, when Ellie reaches out to Holly with kindness, everything changes. While this might not be a strategy that works with every bully, the messages in Ashley’s (Splunkunio Splunkey, 2005) tale that generosity can open doors to healing and that loneliness, rather than meanness, can cause kids to lash out remain welcome steps toward empathy. As Ellie learns to look at the world from another’s perspective, young audiences may follow suit. The author’s quirky photographs will either immediately connect with kids or feel too strange to relate to. The puppets are placed in stiff positions, frequently free-standing, sometimes in repeated poses, in a low-background house and a busy schoolroom.

Young readers should sympathize with the compassionate heroine, and perhaps start to feel empathy for others.