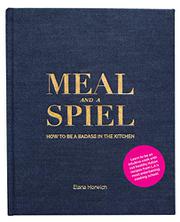 MEAL AND A SPIEL

How To Be a Badass in the Kitchen
by Elana Horwich
BUY NOW FROM
AMAZON
BARNES & NOBLE
LOCAL BOOKSELLER
GET WEEKLY BOOK RECOMMENDATIONS:

Complex Italian cuisine gets translated into a down-to-earth idiom in this tangy cookbook.

Horwich (7 Days of California Healthy Recipes, 2017), a professional chef and cooking instructor, spent five years in Italy soaking up regional cooking styles. Here, she presents a soup-to-nuts set of recipes in which she describes how to cook them and why to eat them. She includes detailed instructions on basics, such as ingredients (extra-virgin olive oil and canned tomatoes are essential), proper kitchen equipment, and cooking methods—from elementary procedures (“If you can throw whole vegetables into a pot, cover them with water, and then go take a nap for a couple of hours, you can make broth”) to complicated roasting and slow-cooking techniques. The mysteries of Italian cuisine are probed in depth, including the secrets of cooking pasta al dente as well as the secrets of eating it: “Bring the fork to your face, stick it in your mouth, pull out the fork and inhale the low-hanging strands of pasta into your mouth without making any noise.” She also covers principles of menu planning—don’t overdo the carbs, she says, and avoid mixing seafood with meat and dairy. There are about 100 recipes, ranging from simple salads and bread appetizers to roast lamb extravaganzas that include a day of prep work; other selections include traditional pasta, meat, and fish entrees and vegan, dairy-free, gluten-free, and paleo fare. There are a few unusual leaps, such as “Lemony Quinoa Salad” and a latke recipe that nods to the author’s Jewish American background. The sumptuous, full-page color photographs of finished dishes are truly a feast for the eyes.

Horwich’s recipes and directions are lucid and easy to follow, and they offer beginners the chance to make sophisticated dishes. They’re also a treat to read, infused with a touch of whimsy (including a relaxed attitude toward measurements), much witty commentary—“my only defense against [some vegans’] moral superiority is childish ridicule”—and background lore and descriptions that have considerable literary flair, as when she observes that “the fig, like a woman, must be prepared delicately and served with the intention to awaken the sublime and the sensual.” But Horwich also writes about the emotional and even spiritual aspects of food, as when she urges readers to “Feel the grains of salt on your skin” as a way of “honoring the salt before you ask it to flavor your food.” The book is, in part, a love letter to Italy—one with wisps of romance (“This recipe was inspired by Edo, the kind of Italian man that American girls can’t help but fall for”) and plenty of local atmosphere: “Surrounded by the renegade left wing of Rome—artists, intellectuals, communists, laborers, Roman Jews, and ex-pats from all over the world—we ate, smoked, and worked on The New York Times’ crossword puzzle.” Readers will find it an engaging book to browse even before they take it into the kitchen.