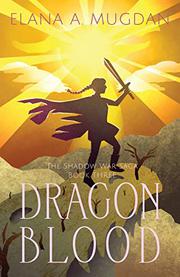 A teen, having trained in combat and magic, treks across the world of Selaras to conquer an evil, powerful being in the third installment of Mugdan’s YA fantasy series.

Keriya Soulstar suddenly awakens in the country of Jidaeln. Her memory slowly returns: She had been in Allentria, on the other side of the world, fighting sinister Necrovar, or “the Shadow.” Uncertain of how she wound up in Jidaeln, Keriya wants to return to Allentria and ensure Necrovar’s defeat. She begins by requesting that elite soldiers, the Xamarai, train her; despite the valuable, ancient sword she received as a gift, Keriya’s blade skills are subpar. She undergoes rigorous training and finds an ally in military leader Viran Kvlaudium, who ultimately joins Keriya’s expedition to Allentria. The dragon god, Shivnath, who for an unknown reason enlisted Keriya to face Necrovar, gave the teenager magic to use—only once—against the Shadow. Since then, she’s displayed no power other than telepathy. But Viran helps Keriya realize she’s capable of much more. The two secure passage to Allentria, already under threat from sorcerers aligned with chimeric creatures known as daemonion. Merely getting to their destination is treacherous, as Keriya, Viran, and companions along the way confront demons and monsters of the sea. Although this is a second sequel, Mugdan (Dragon Child, 2019, etc.) packs it with plot. Keriya, for example, endures bullying, as she’s the only female trainee among the Xamarai, and learns something about the sword she acquired prior to this book. She’s a tenacious protagonist with a discernible physical trait in her purple eyes—which were formerly an indication of great power—courtesy of Shivnath’s magic. The author’s lucid prose and smooth transitions between character perspectives make the occasional battle sequence easy to follow despite the frantic goings-on. As Keriya continues to hone her magic and decipher her enigmatic link to Shivnath, the narrative remains quest oriented. With that in mind, the subtle romance between Keriya and Viran is refreshing, if intermittent.

A swiftly paced, exhilarating volume in a saga likely to appeal to all ages.