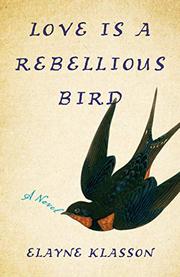 LOVE IS A REBELLIOUS BIRD

A debut novel follows a girl’s crush as it evolves into a lifelong tale of obsession and passion.

Judith first met Elliot as a fifth grader who had recently moved to Chicago’s North Side in the mid-1950s. Then, he was just a little boy with torn trousers, but over the course of the next 60 years, Elliot would become Judith’s lover, friend, and permanent addiction. “Our relationship was a cocktail mix of rivalry and loyalty—shaken with a strong dose of passion and resentment,” Judith writes of their time as academically competitive sixth graders, which would set the tone for the decades to come. Following the suicide of Elliot’s mother, Judith consoles him while being overjoyed at their relationship’s shift into teenage romance, but college abruptly ends her dreams of a happily-ever-after. Instead, they pursue different paths, with Elliot transforming into a high-powered New York attorney and Judith becoming a divorced social worker in California. Through letters and cross-country trips, they remain in each other’s lives. But Judith always follows their unsaid agreement that she not talk about her love for him. Throughout children, divorces, and even deaths, Klasson brings the two characters together again and again with the same devastating result for Judith, who never gives up on the “man by which I had measured all other loves.” Written in the first person and addressed directly to Elliot, the novel’s prose is strikingly elegant and intimate. What could easily slide into a melodramatic tale of long-lost love turns into a realistic and psychological study of one woman’s deepest thoughts. The author also cleverly develops supporting characters through Judith’s eyes. (Judith’s eventual friendship with Elliot’s second wife and her reactions to Seth, her philandering first husband, are easily some of the narrative’s most memorable and captivating moments.) While the pace of the book’s second half slows down considerably as the two lovers move into old age and toward the bittersweet conclusion of their long journey, Klasson fills every scene she can with thought-provoking reflections on the nature of love, family, and romance.

A surprisingly complex and realistic love story delicately narrated by an endearing protagonist.