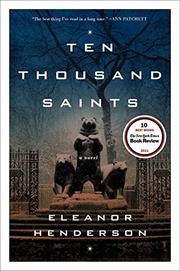 Screwed-up parents beget screwed-up kids. So it’s no surprise that an ill-omened teen pregnancy is the centerpiece of this bold debut, a heady witches’ brew.

Teddy and Jude, best friends in their mid-teens, have big problems. Jude was adopted at birth, possibly suffering from fetal-alcohol effects. His adoptive parents, Les and Harriet, are feckless potheads, Les growing pot, Harriet making drug paraphernalia. When Jude turns nine, Harriet evicts Les for cheating on her; Jude hasn’t seen him since. As for Teddy, his Indian father is supposedly dead; his white mother, a sloppy drunk, has just split. The boys skateboard through their Vermont town, getting high and shoplifting at will. On this last day of 1987, they have a date with Eliza, a total stranger but the daughter of Les’ girlfriend. At 15, she’s already a cokehead and sexually promiscuous. They gatecrash a party. Eliza gives Teddy cocaine before they have sex in a bathroom and she returns to New York. Back out in the cold, Jude’s idea that they inhale Freon is a step too far; he almost dies and Teddy does die, but he will haunt the novel, for he has made Eliza pregnant. All this could be depressing, but it’s not, thanks to the barbed language and fast pacing. And Henderson’s just getting started. Les shows up to remove Jude to Alphabet City, the ravaged Manhattan neighborhood where he lives. A near neighbor is Teddy’s 18-year-old half brother Johnny, whose role becomes increasingly prominent. Johnny is a tattoo artist and musician, as well as a straight-edge hardcore punk (no booze, no drugs). Although a closeted gay, he chivalrously offers to marry Eliza and claim paternity to thwart Eliza’s mother, who’s pushing for adoption. This is where Henderson loses the thread, wobbling uncertainly between Jude, Johnny and Eliza while doing double duty as a counterculture guide to the straight-edge scene. Context overwhelms characters, the unwieldy cast now including Johnny’s AIDS-stricken lover and Teddy’s Indian father.