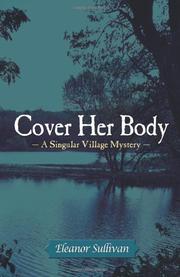 A Separatist healer is determined to identify a killer, even if it places her under suspicion for incompetence—or even murder—in Sullivan’s (Deadly Diversion, 2009, etc.) historical mystery.

In the strict religious community of Zoar, Ohio, healer and midwife Adelaide Bechtmann is already flirting with disapproval when she goes to her favorite riverside spot to meditate. Instead of finding peace, she discovers the body of 16-year-old Johanna Appelgate floating in the river. When she pulls Johanna out of the water, Adelaide knows the young woman couldn’t have drowned, due to the absence of water in her lungs. The Separatists are all too willing to dismiss Johanna's death as a tragic accident, so Adelaide’s attempts to find her killer ignite controversy in the closed community. Even her beloved husband, Benjamin, fearing the loss of their comfortable life, refuses to support his wife’s investigation. Adelaide’s knowledge that the young woman was pregnant complicates the situation, and she’s anxious that the “remedy” she prescribed may have contributed to Johanna’s demise. Adelaide struggles to preserve the reputation of the deceased girl, even as her own deteriorates, and she can’t help but remember her husband’s closeness to Johanna. The conflicts between homeopathy and traditional medicine, marriage and celibacy and the eternal struggle for power among the male Separatists are all interwoven in the finely drawn murder mystery. Award-winning Sullivan brings the Zoar community to life, imbuing both real and fictional characters with laudable qualities as well as flaws, although antagonists Simon, Martin and Gerda are unrelentingly unsympathetic. While enough background information on the Separatists is provided to prevent reader confusion, Sullivan is a little stingy with her backstory, hinting at Adelaide’s prior tragic error without ever fully explaining it. Sullivan’s otherwise expertly crafted, perfectly paced novel suffers from comparatively underdeveloped relationships between Adelaide and those presumably closest to her—her husband Benjamin and sister Nellie.

Winning first installment in a planned series, sure to be loved by fans of both mysteries and historical fiction.