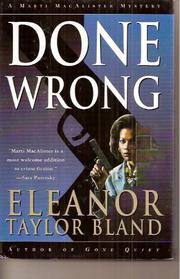 A Chicago narcotics cop's suspiciously fatal fall from the roof of a parking garage rips open Marti MacAlister's three-year- old wounds of grieving for her own husbanda colleague of Julian Cantor's who supposedly ate his gun in a Chicago cemetery. Now, even though she's made a new life for her family in suburban Lincoln Prairie, Marti's driven to return to the city with her partner, Vik Jessenovik, to get the truth about Johnny MacAlister's death. With some unwilling help from a rogue's gallery of druggies, snitches, transvestites, and convicts, the pair piece together the tale of two sorry drug-busts in which big dealer Angelo Estlow walked and $250,000 vanished, presumably into the Man's hands. But as Marti, aided by some coded clues Johnny left behind, finally closes in on his killers, she doesn't know that an assassin named Diablo has targeted all her leading suspectsretired Vice chief Daniel Crosby; his old buddy, Deputy Chief Joe Riordan; drug unit leaders Lt. Frank Murphy and Sgt. Leotha Jamisonif they don't trip over themselves betraying each other first. Crisp action sequences, dirty cops, dogged procedural work, quietly telling family scenes: Marti's fourth appearance (Gone Quiet, 1994, etc.) has it all.