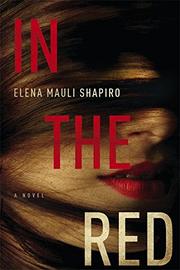 A Stanford freshman finds herself drawn into an Eastern European immigrant underworld in this erotically charged second novel from Shapiro (13, rue Thérèse, 2011).

Brought to America from a Romanian orphanage when she was 5, Irina has always felt isolated from her peers and her loving but clueless adoptive parents. Days after moving into her college dorm—where she’s already aware she will not fit in socially—she meets Andrei, who immediately recognizes her as a fellow Romanian. He's older, but she's drawn to his sinister sense of irony, potential for cruelty and occasional flashes of vulnerability. They become lovers, and she begins spending most of her time with him and his two associates, crude fellow Romanian Drago and former Russian soldier Vasilii, who at first seems more refined than the others. Although Andrei calls himself a capitalist entrepreneur, Irina knows the men’s enterprises, like a chop shop for stolen cars, are shady at best. She travels with the men to Las Vegas, where Vasilii marries the strikingly beautiful Elena, who has been sent to him from Russia. Life turns darker. The girls are made to attend a disturbing stage show that includes live sex. Drago informs Irina that he's offered Andrei $10,000 to fuck her. Andrei gives her a fake passport and bank account, then sends her to buy expensive clothing and jewelry she wears once—to make love with Andrei—before it disappears. Irina becomes increasingly aware that Vasilii is the one in charge and that perhaps he is a truly evil man. The story of Irina’s life with Andrei is interspersed with bits of Romanian history and the dark, twisted Romanian folk tales Andrei tells. Also scattered throughout are scenes from Irina’s future life as a lonely bank teller after Andrei casts her out of his world.

The limpid prose quickly persuades the reader to a trust not unlike Irina’s in Andrei—and like Andrei, Shapiro’s novel is at first enticing, then ambiguous and ultimately coldhearted.