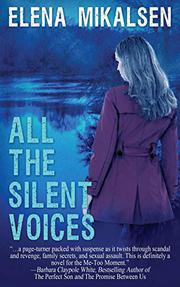 ALL THE SILENT VOICES

A Virginia woman contemplates revenge against her new boss—the very same man who raped her years ago—in Mikalsen’s (The House by the Cypress Trees, 2019, etc.) thriller.

Emma and Aidan Shephard are both worried about their jobs. The owner of Davis & Parsons, the pharmaceutical company where the couple works, is planning to sell. But the unexpected buyer is Avias Global, which is set to merge with D&P. The more startling news for Emma is that the Avias president is Richard Stolar. She quickly confirms he’s the man who beat and raped her at her college, Westview, more than two decades earlier. People at Westview, including the dean, dismissed Emma’s assault claims back then, and she’s never told Aidan about what happened to her. With revenge in mind, Emma ultimately concentrates on Parozex, an antipsychotic drug Richard wants fast-tracked to FDA approval despite potentially fatal side effects. Emma looks for dirt on the new boss and uncovers a surprising link to her former college roomie, Shannon, and Emma’s boyfriend at Westview, Jeff. Richard’s scheme to get Parozex onto the market is unquestionably unethical, but with employees scared of losing jobs and Aidan getting chummy with Richard, convincing others won’t be easy for Emma. Though Mikalsen’s tale has the hallmarks of a thriller, it’s most riveting as a drama. Emma’s story is at times heartbreaking; she often blames herself for Richard’s vicious assault and is psychologically incapable of using stairs, as the attack took place in a stairwell. But it’s gratifying to watch her persevere even as she stumbles, as when she enlists her teen daughter, Sophie, for her hacking skills to dredge up info on Richard. There’s suspense, particularly near the end, and a few memorable plot turns, while the author’s taut prose dramatizes the protagonist’s inner conflict. Her building anger, for example, results in fists so tightly clenched her fingers ache. Still, the book shines brightest with Emma’s triumphs, such as the support she receives from and provides for another rape survivor.

A novel at its most engaging when it shows the protagonist’s struggle to recover from trauma.