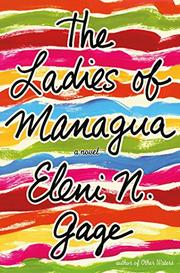 THE LADIES OF MANAGUA

An up-and-coming painter faces the collapse of her romantic life while repairing her neglected relationship with her mother.

“Revolutionaries make bad husbands.” So says Isabela, mother of Ninexin (a former Sandinista–turned-politician shaping the new Nicaragua) and grandmother of Mariana (an aspiring artist). She should know. Although her own husband, Ignacio, contented himself with running a law practice and hiding his mistresses, her son-in-law, Manuel, lost his life to the revolution. But this is a story about the revolutionary lives women make for themselves out of necessity, out of commitment, out of passion. After Manuel's death (in a shootout shrouded in mystery), living in Nicaragua becomes increasingly dangerous for Ninexin, so she sends their 7-year-old daughter, Mariana, to live in Miami with her parents. The cost: Mariana and Ninexin become estranged—Ninexin convinced that Mariana will judge her, Mariana convinced that Ninexin always loved Nicaragua more than her own daughter. But when Ignacio dies and his body is flown to Nicaragua to be buried, Mariana returns to Managua not only for the funeral, but also for a little time away from her boyfriend, Allen. Divorced, a successful painter, and quite a bit older than Mariana, Allen follows her to Managua, hoping to repair their fragile relationship. This novel fairly begs to be filmed. Chapter by chapter, Gage (Other Waters, 2012, etc.) shifts from Isabela’s to Ninexin’s to Mariana’s perspective, often retelling the same scene through another character’s eyes. These shifts reveal the emotional ties binding the women together as well as the secrets that have forced them to make painful choices.

From the closely chaperoned lives of schoolgirls in 1950s New Orleans, where Isabela was a student, to the explosive insurrection of 1970s and '80s Nicaragua to the sniping artistic world of 2010s New York, Gage carefully and thoughtfully explores the social demands placed on women and the repercussions of submitting to or defying them.