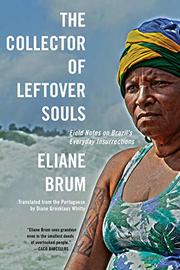 THE COLLECTOR OF LEFTOVER SOULS

A selection of journalistic pieces from 1999 to 2007 by an accomplished Brazilian journalist, novelist, and documentary filmmaker spotlights “a country that exists only in the plural…the Brazils.”

A rigorous investigative journalist who attempts to inhabit the lives of her subjects while suppressing her own “biases, judgments, [and] worldviews,” El País columnist Brum (One Two, 2014, etc.) adheres to a method of listening carefully and letting her subjects unravel the story themselves. In the first piece, “Forest of Midwives,” the author chronicles the vivid tale of midwives in the riverlands of far northern Brazil, whose ancient skills at “baby-catching” are passed from generation to generation. Although the women don’t get paid or have a lot to eat, children are their riches: “Out here in these backwaters of death,” says one elder midwife, “either we fill the world with children or we vanish.” Brum writes eloquently of people mired in the doomed cycle of poverty, most of whom can’t get a leg up because there is no support. In “Burial of the Poor,” the author writes about Antonio, “feller of trees,” who walked to the hospital to retrieve his stillborn baby, just one of the numberless poor who “begin to be buried in life.” In the most heart-wrenching longer piece, “The Noise,” Brum tells the story of T., a longtime worker in an asbestos plant in São Paulo who was dying of mesothelioma (the “noise” was the hideous sound of his gasping for breath). Poisoned by the plant owners who knew the health danger and tried to get him to sign away indemnity (he refused), he told Blum, “I am made of asbestos.” Among many other poignant stories, the author describes the teeming underbelly of the favelas in Brasilândia, the desperately poor gold prospectors in Eldorado do Juma, a defiant elderly community in Rio de Janeiro, and a threatened clan of Indigenous people deep in the heart of the Amazon.

Ordinary lives rendered extraordinary by a master journalist who captures all their perplexity and quiet rebellion.