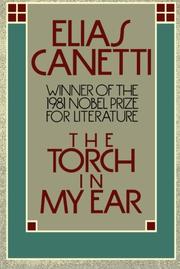 THE TORCH IN MY EAR

Like the first volume of Canetti's memoirs, The Tongue Set Free (1979), this second installment is unshapely in the extreme--abrupt at both beginning and end; and there's an increasing sense that the flow of Canetti's thoughts is ill-suited to volume-by-volume autobiography. Still, there's rich material here and there--as Canetti, with his youngish widowed mother and his younger brother, now moves from Zurich to Frankfurt (1921). The young Elias is far from happy with the change. A large ongoing dose of bitter gall passes back and forth between him and his emotional mother, a jealous and easily-led woman. But, this being an intellectual autobiography above all, the focus here is less on feelings than on spiritual illumination. Canetti concentrates, then, on his discovery of the Gilgamesh myth, of Aristophanes; moving to Vienna with his brother, he glimpses the first signs of what will be his lifelong interest in crowds and human types; later, in Berlin, he will come in contact with Brecht, George Grosz, and Isaac Babel. Canetti never becomes close enough to any of these major artists, however, to be much more than awed by them: the portraits are disappointing, lacking in personal detail--especially in Babel's case. Moreover, through his memoir, Canetti includes long, parenthetical chapters about grotesque and disturbing acquaintances: his landlady, who went through the rooms at night, licking the backs of framed photos of her husband; his friendship with a brilliant paraplegic named Thomas Marek. And though these odd vignettes can sometimes be morbidly striking, they are often incomprehensible--with no clue as to their thematic role (some such role obviously seems intended) in Canetti's self-history. Some individually absorbing moments, then; but for the most part this is a lurching assemblage of memories and musings--without the authorial angle or narrative shape needed to help readers through Canetti's enigmatic chains of thought.