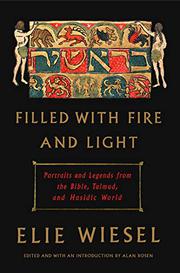 FILLED WITH FIRE AND LIGHT

Portraits and Legends From the Bible, Talmud, and Hasidic World

Adapted from a series of lectures delivered between 1967 and 2014, Nobel laureate Wiesel (1928-2016) celebrates the lives and struggles of spiritual leaders appearing in the Bible, Torah, and Hasidic lore. How, he asks, can one person make a difference when faced with evil and oppression? With a special affection for prophets, the author introduces Elisha ben Shafat, “strange, elusive, complex, full of contradictions,” a man of volatile temper, at times directed cruelly at children. His teacher was the prophet Elijah, to whom Elisha felt unwavering loyalty. Purveyor of 16 miracles, especially in the aid of women, Elisha fought hunger, repelled enemies of the king of Israel, cured the afflicted, and intervened in affairs of state, including the incitement of a bloody revolution. Among biblical kings, Wiesel singles out Josiah, “one of the notable exceptions to the corrupt idol-worshipping Jewish kings,” who restored the commemoration of Passover among his people. From the Talmudic universe, “a place where conflicts and contradictions meet and rarely get resolved,” Wiesel examines the odd friendship between Rabbi Yohanan and the courageous gladiator Resh Lakish, to whom the rabbi offered marriage to his beautiful sister. The contrast between the two men, Wiesel observes, inspired their grappling over meaning in the Torah. Each attracted Wiesel: Resh Lakish for his “sense of urgency” and commitment to seek the truth; Rabbi Yohanan for his compassion. The enigma of Satan focuses one chapter. In another, Wiesel creates an admiring portrait of the philosopher and scholar Rabbi Schneur Zalman, founder of Chabad Hasidim, a deeply humanitarian sect that offered “a new way of attaining hope” and community to Jews—often uneducated and disaffected—who were scattered throughout Eastern Europe. Wiesel counts himself among Hasidim. “Faith in memory,” Wiesel reminds readers, “helps individuals transcend their condition” and justifies “faith in the future.”

Empathetic inquiries into the challenges of faith.