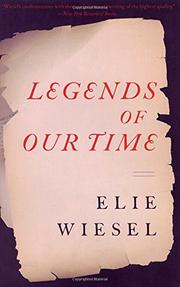 LEGENDS OF OUR TIME

The author of The Jews of Silence (1966) and other works dealing with the Jewish survivors of the holocaust and problems of present-day Jewry, again returns to the unthinkable, looks forward to the future in essays and sketches. As a survivor of Auschwitz, the Israeli journalist probes the heart of the terror and finds no answer, no intellectual meaning. "The executioner killed for nothing, the victim died for nothing." In the present the author returns in memory — to the death of his father, the flaming death of a child, the death of an inmate who fasted as a reproach to God. He also goes back to Germany, guilty for his lack of hatred; to his village, knowing it had disappeared with the murdered Jews. However, a visit to Russia confirms his feeling that Russian Jewry is growing in strength and cohesiveness. In a moving last essay, Wiesel again angrily answers those who question the "submissive" deaths of Jews "forgotten, sacrificed, crossed off by humanity" "To die struggling would have meant a betrayal" of the dead who died in dignity. A fierce and moving continuation of the dialogue of those who will not forget.