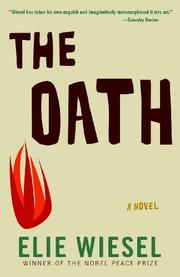 Again Wiesel's richly somber, close and faintly cantorial prose flows over and repolishes the same impenetrable mysteries: that the massacre of innocents transmits a lifelong burden to the survivor; and that the survivor, both doomed and blessed, is forced to confront the knowledge of death which is "not a solution but a question, the most human question of all." This is the narrative of Azriel, the Na-venadnik or perpetual wanderer, who tells the story of his murdered Jewish village — his search for the "soul of the world" among holy men, rationalists, pragmatists and the sacred certainties of beggars and madmen. But Azriel is under an oath of silence, demanded of the village by the "madman" Moshe in the hours before the holocaust — is not testimony Death's ally, the articulation of killing inevitably linked to the act? Therefore, proclaimed Moshe, "we will testify no more." However, since death is "the primary defect. . . in creation," Azriel does tell his story to a young listener to prevent his suicide — to cheat death. Wiesel confronts concepts of fact and symbol and God and man while the meditations, Talmudic discourse, and tales of bestiality and nobility converge toward that night of absolute fear preceding the massacre — and the author mounts horror like a lectern. As in Beggar in Jerusalem (1970) and others, Wiesel examines the possibility of answers to the human dilemma with the experiential agony inherent in the question. Demanding and rewarding.