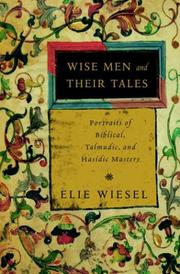 WISE MEN AND THEIR TALES

“Just as the Torah has no beginning,” writes Wiesel, “the Talmud has no end. Each succeeding generation of scholars contributes to its growth and its power.” Those scholars famously find much to argue about in the layers and layers of earlier commentary, and Wiesel reveals himself to be a wise and humane arbiter himself in pondering some of the finer points of their learned discussions, as even-handed (and sometimes tentative) as his great hero, the medieval Talmudist Rashi. Along the way, Wiesel considers some classic—and some modern—puzzles. If Abraham was such a great guy, then why did he banish Ishmael and have that terrible moment with Isaac? Why such harsh punishment for Lot’s nameless wife, turned to a pillar of salt for having ignored instructions not to look back on a scourged Sodom? (“Only because she looked where it was forbidden to look?” writes Wiesel. “So what! If our own gaze could kill us, there would not be enough room for all the cemeteries on our planet.”) Why did Aaron, to name just one ancestor, have such a rough time at the hands of a jealous God? Why is it so difficult for a Christian, say, to convert to Judaism? And, finally, “Must the ineffable remain outside the realm of words, simply because there are no words? Can Auschwitz be understood by anyone who wasn’t there?”

Wiesel proposes few definitive answers—here, the question mark appears as often as the period. But his explorations, drawing on the collective wisdom of prophets, rabbis, and scholars from the earliest days to the present, are endlessly illuminating.