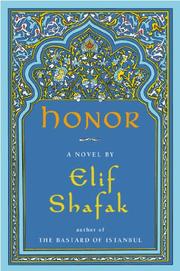 Turkish novelist Shafak again explores sociopolitical issues within a deeply human context in this tragedy about how traditional Turkish Muslim attitudes toward women impact a family that has immigrated to England.

“My mother died twice,” is the novel’s telling first line, spoken in 1992 London by educated, assimilated Esma on her way to pick up her brother Iskender from the prison where he’s been incarcerated since 1978 for the murder of their mother, Pembe. The killing is a given. The drama lies in what led to such violence, which Shafak explains through the history of Pembe and her husband, Adem, with whom she moved to London, of their three children who have grown up in England, and of Pembe’s twin sister, Jamila, who has stayed behind in rural Turkey. Pembe has always been the more adventurous sister, Jamila the dreamy, spiritual one. Originally, Adem falls in love with Jamila, but she is already promised to an elderly man from the family that kidnapped her and therefore compromised her honor. Seeing him as a means of escaping to a larger world, Pembe convinces Adem to marry her instead. They move to London. By the late 1970s, Adem has gambled away their savings and deserted Pembe to live with his mistress. To make ends meet, she takes a job at a hair salon and begins to blossom. Bookish Esma and handsome Iskender struggle as teens to find their place in British society, but British-born 7-year-old Yunus is thoroughly British. A magical child, innocent yet wise beyond his years, Yunus becomes the mascot for a group of hippies in a nearby squat. Then Pembe meets a nice man and falls in love. Never mind that Adem is living with his mistress; Iskender feels compelled to save the family’s honor. But 14 years later, Iskender and Esma must come to terms with past actions.

Shafak turns what might seem a polemic against honor killing in lesser hands into a searing but empathetic and ultimately universal family tragedy.