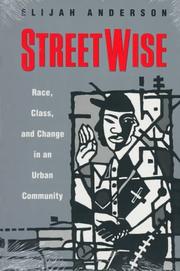 STREETWISE: Race, Class, and Change in an Urban Community

A lively slice of sociology from Anderson (Sociology/Univ. of Penn), who here explores two pseudonymous communities--the ""Village"" and ""Northton,"" of pseudonymous ""Eastern City""--in order to get at some of the root causes of urban America's epidemic of drags, crime, and decay. Begun in 1975, based on firsthand observation of a big-city neighborhood, and incorporating much commentary by that neighborhood's citizens, Anderson's study looks at the shifting relationship between the predominately white, upscale Village and the contiguous community of Northton, primarily black and low-income. Geographically juxtaposed, the two communities, Anderson finds, impact constantly on each other, while the history of the general area ""is interwoven with the growth and expansion"" of the city itself. Anderson focuses mostly on Northton and the negative aspects of drugs, violence, sexual codes, poverty, and ""street wisdom""--that state of mind that enables residents to ""know 'how to behave' in uncertain public places."" While the Village remodels and real, state values increase, Northton continues to slide into deterioration and despair. And like so many other American communities, says Anderson, the Village then attempts to seal itself off from Northton, and to legislate against ""spillover crime"" originating in the rundown section of the city. Moreover, to further complicate and intensify the problems of the ghetto community, as family, social mores, and traditional institutions break down, those who can, flee. There are then no ""older heads"" around to show the younger generations a better way. Perceptive and street-authentic, but all-too-familiar, and Anderson's failure to identify his communities renders his data troublingly unverifiable and mutes its sting.